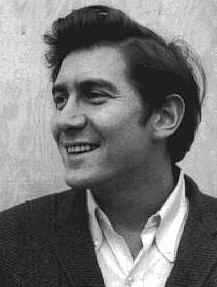 Phil Ochs (1940-1976)
One of the greatest, if not the greatest, of the protest singers of the sixties, Phil Och’s life was also among the most tragic. The author of such songs as “I Ain’t Marching Anymore” and “Draft Dodger Rag,” two of the great anthems of the anti-Vietnam war movement, Ochs himself had attended a military academy before going to college in Ohio. Born in New York, he returned there in 1962 to devote himself to a career as a folksinger, recording his first album, “All the News That’s Fit to Sing,” in 1964. His three topical albums (including “I Ain’t Marching Anymore” (1965) and “Phil Ochs in Concert” (1966) covered issues large and small, from the woes of the journalist William Worthy after his visit to Cuba (“The Ballad of William Worthy”) to the US invasion of the Dominican Republic (“The Marines Have Landed on the Shores of Santo Domingo) and the horrors of the segregationist south (“Here’s to the State of Mississippi”).
In 1967 he left New York and Elektra Records and moved to California and A & M records. These moves were significant in many ways, as he left behind the political and musical world that he had been part of for a far different milieu, and the differences are reflected in his subsequent albums. In his first A & M album, “Pleasures of the Harbor” the guitar strumming folkie is replaced with a tenor backed by huge orchestrated productions, and the biting political lyrics were replaced with long, flowing poetic pieces. This was to be the most controversial period of his artistic career, and even though he continued to sing the occasional political song (“White Boots Marching in a Yellow Land,” “The War is Over”) he had clearly – musically at least – left behind his political roots and returned to those he had kept hidden until then, those in the music of Buddy Holly and Faron Young.
Despite the musical turnabout he never really abandoned his politics, participating in the demonstrations in Chicago in 1968, testifying at the trial of the Chicago Eight, and later organizing a Chile benefit concert. But his adoption of gold lamé suits and a rock-and-roll persona led to stormy results at his concerts in the early seventies, best summed up by the title of an album never released in the US, “Gunfight at Carnegie Hall.” There are many explanations of his musical change, but not the least of them was his depression over and disgust with American politics, which he feared had taken a fascist turn, all of which he clearly expressed in interviews at the time. Perhaps as much as anything, though, it was a misguided attempt to reach a new audience.
Already all but abandoned by his former fans, his final descent towards death began with his being attacked on a beach in Tanzania, causing damage to his vocal chords. He was throwing away money he didn’t have, drinking heavily, and in his psychosis developed a new persona, that of John Train. He finally found himself living at his sister Sonny’s house in the Far Rockaway section of Queens, where he committed suicide on April 9, 1976.
Posted by UNITY at 12:15 1 comment:

Stevie Wonder - Living for the City