Brecht and Company: Sex, Politics, and the Making of the Modern Drama 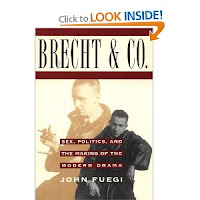 Was Bertolt Brecht a Fraudster ?

Bertold Brecht is well known for his plays, poems, short stories
and contributions to theatre theory and practice .His influence is extensive in theatre and in the films of Lars Von Trier, Werner Fassbinder,Nagisa, Oshima, Ritwik, Ghatak and Jean Luc Godard. Yet since the publication of John Fuegi’s biography of Brecht in 1994’ Brecht and Company’ a debate has raged about whether Brecht was not more than a bit of a fraud with as perhaps as much as 80 % of the writing being the work of others-most notably three women-Elisabeth Hauptmann, Greta Steffen and Ruth Berlau.


Fuegi’s central argument is that Brecht had neither the talent nor the will
power to write or finish much of the most famous works that he is credited for –works such as “The Threepenny Opera” , “Mother Courage and her Children” and “Galileo”. The book claims there is documented evidence that these works were written by these three women. The famous ‘Threepenny opera’ is 100% the work of Elisabeth Hauptman Fuegi contends.

The 700 page biography researched over 25 years represents Brecht as an arch- manipulator of people and a misogynist who engaged in “sex for text” deals. Brecht had extraordinary charisma and charm that seduced figures such as Kurt Weill, Auden, Isherwood, and Charles and Laughton as well as the three lovers and creative collaborators Hauptmann, Steffen and Berlau.

Brecht, according to Fuegi, was a product of a middle class upbringing
in Augsburg Germany- an environment and culture that saw “the denigration of women” as “wholly natural”. Plays with strong female characters such as “Saint Joan of the Stockyards”, “The Good Woman of Setzuan”, “Mother Courage and Her children” and “The Caucasian Chalk circle” could only have been written by these politically committed communist women, argues Fuegi.


Fuegi goes on to accuse Brecht of being a plagiarist, stealing works from French symbolist poets Verlaine and Rimbaud something most clearly visible in the 1927 play “Jungle of the Cities”. Manuscripts in Elisabeth Hauptmann’s handwriting or her strike pattern on typewritten texts prove beyond doubt that “The Threepenny opera” was written by Hauptmann without either credit or royalties going to her. To the reply that it was possible Brecht might be dictating ,Fuegi insists times and dates of when they were together don’t back this up. Brecht's own contribution was the song “Mack the Knife and few “nips and tucks” to the look of the script.

Fuegi goes on to state that Brechts influential theory of theatre “The Epic theatre” was motivated by a financial backer who thought it would make more money.
“Invent a theory, my dear Brecht! When one presents Germans with a theory, they are willing to swallow anything” .

Brecht’s relationship with women followed a pattern- use them to the point
where they break with him, at that point – focus exclusively on the one who has broken away to get her back into the fold then, go back to the same maltreatment
that went on before. Fuegi’s explanation as to why the women stuck around or continued to help Brecht as they did long after relationships were over , was the hope that one day eventually each of them would have Brecht to themselves.

But by far the most controversial part of the biography is Fuegi lumping
Brecht in with Hitler and Stalin.

“ To understand this century, it is essential to recognise the wholly irrational power these figures- whether Hitler, Stalin, or Brecht-exerted when they were encountered in person. Brecht is very much a part of this century of the charismatic,irrational yet effective Pied Piper powers that could, in the case of both Hitler and Stalin, lure hundreds of millions of supposedly intelligent beings to embrace their butchers.

Hauptman, Steffen and Berlau were intriguing women and Fuegi does a service in relating their stories and showing that they were both talented and more politically committed and ethical than Brecht. When Brecht went into exile in 1933 , Hauptman risked her life by remaining in Berlin in order to gather together and secure all of Brecht’s papers and manuscripts and get them out of Germany. Hauptmann, according to Fuegi was the author of most of the Short Stories. Margaret Stefan

contributed significantly to “Mother Courage and her Children” and “The Good Woman of Setzuan”. She continued to help Brecht while suffering from TB, dying painfully at the age of 33 from the disease. Her death in 1941, argues Fuegi, meant the virtual death of Brecht as a playwright .Berlau contributed to "Brecht" plays such as The Caucasian Chalk Circle, Simone Machard, & The Good Person of Sezuan. She loved Brecht in her words “not wisely, but too well." and was not credited by him for her contribution.

In 1997 Sabine Kebir replied to Fuegis' work in “I didn’t ask for my share: Elisabeth Hauptmann’s Work with Bertold Brecht”. Kebir examined the Hauptmann archives at Berlin's Akademie der Kunste and referred to previously unknown notes and letters as well as Hauptmann’s 1926 journal. Kebir suggest that as members of the CP in the mid- twenties, there were drawn to the collective of artists, writers and intellectuals around Brecht precisely because it was a collective collaboration that promised to shorten the road to Women’s’ Liberation and Socialism.

The women were openly interested in sex, sexual experimentation and autonomy in relationships free of ownership claims, including claims to mental property and sexual partners. Open marriages, triangular and bisexual relationships were part of the social utopia they pursued. These sometimes collided with more traditional needs and expectations resulting in great personal pain- but this was a very different complex contradictory reality from the passive women as victims story that Fuegi represented.

Fuegi’s book makes a strong case for Brecht being an overly controlling, self- centred miser who repeatedly used people and took credit for others work. Perhaps he was a mysoginist also (one example-in his will he asked to be buried with a stilletto heal through his heart) Fuegi also makes a an undeniable case for these women being better known than they are and the book is worth reading for their stories alone. However Brecht was not a talentless, Svengali figure whose abuse of power was akin to a Hitler or a Stalin. Work like ‘The Seven Deadly Sins of the Petty Bourgeoisie’ and ‘Days of the Commune’ and poems like ‘The Song of the Class enemy’ and ‘Questions from a Worker who reads’ are the work of a very gifted writer who contributed enormously to theatre theory and practice.
Posted by UNITY at 05:13 6 comments: