"The Treason of the Intellectuals" 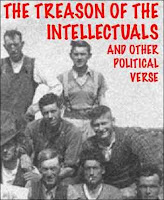 "The Treason of the Intellectuals, and other political verse" by Sean Matgamna includes political verse previously published in Solidarity and its forerunners. All proceeds from sales of the book, above printing and dispatch costs, go to the AWL fund drive.

Verse against the odds

This collection includes 60-odd pieces of political verse written over the last quarter-century, most of them originally published in Solidarity or in one of its forerunners.

To devote yourself to the cause of the self-emancipation of humanity, to revolutionary socialism, in an epoch of catastrophes for that project, is to expose the heart as well as the mind to the corrosions of repeated setback, disappointment and defeat. Some of the pieces in this collection celebrate working-class struggle and the great working-class victory in 1917. Many explore the experience of defeat and the aftermath.

They represent the work of “the heart” as well as of the mind in engaging with these corrosive forces — the loss and disgust, the anger and hatred, the love, the hope, the vulnerabilities of the point of view that sees all of humanity as its family.

In search for a standpoint that can contain that burden without breaking, you have to work on it, tend to it... to interrogate thought and feeling as they are fused and lived in the subsoil of politics. The disciplines of political verse can provide the space to do that.

Two pieces here, “Remember” and “In Assisi”, embody the keynote theme and motif that binds the collection together: the moment of youth in which the “moment of the future” is glimpsed and then looked back on, even when “youth-set Truth” becomes “afraid to brave despair”.

These pieces and others in this collection urge readers to arm themselves against fear and despair by reconquering the moments when “fear did not unnerve high hope” and “douse the blaze”.

There are many “Phoenix”-like images in the collection. In one of the longer pieces, “Sunday before war”, we see the bad Phoenix, a despair that takes flight and hovers above us. Helicopters will rise from fires fed by “oil-fields, cities, seas and babies”.

The war in question is the first war against Iraq in 1991. A cold winter morning in Whitechapel market sets the scene for anguish about the impending catastrophe of war to be, expresssed in verse. “Swirling blades” are rehearsing for the coming destruction above “mad ripper Jack’s wrecked lanes”. The verbal association links the individual butchery by the maniac serial killer to the serial butchery of an imperialist power. The maniac scattered the remains of women on Whitechapel’s pavements. Class society scatters the remains of the old, the sick, the “wholly dispossessed” on those same streets.

The piece entitled “I learn to tell the time” is a reflection on human time. Here a family are remembered sharing time and losing time. Class society in general and capitalism in particular are thieves of human time:

“Hard times: she has gone back again to serve

In the workhouse hospital for seven nights

A week; two kids, snatched sleep, too many fights.”

An exhausted mother, “her sleep is heavy all around us”. A father close to breakdown. “She can not last for long, nor can his nerve”; but time is found to “teach me to unlock, To ‘read’, the secret signs on our old clock”.

The desperate search for work will steal the father’s time with his family:

“For years we measured time after he went

By the ticking of the money wires he sent.”

Over the 140 pages of this collection, which includes a prose reflection on Catholicism in Ireland in the author’s childhood in the 1940s and early 50s, we have a sustained engagement with history and memory and time. Here is an honest record of fears, disgusts, delights and hopes; but, above all, it is a record of memory as a source of regeneration of political will. Memory as the source for the birth and rebirth of the revolutionary phoenix.

The writer “refuses to forget” why he entered into a long combat with the exploiters of the working class and the enemies of human self-emancipation everywhere. This collection is the record of that combat on the level of emotion, memory, promise, doubt and hope.

One of the pieces, “Collage in a bleak April”, incorporates the words of the American Trotskyist James Cannon:

The thing that inspires life,

That makes life worth the living

In face of all the dangers,

Is to have committed one’s own self

To the effort to change it.

The long piece on James Connolly cites the words with which Connolly ended his letters: “Hope and Fight”.

Those words neatly sum up the politics of this collection, too. These days there is widespread prejudice against verse, and even more so against political verse. Fight it! Check out this collection.

Of both sides of your mouth,

Reining in, when you want

To shout and jeer and taunt;

Saying half, or less,

There everything is tact,

The greatest crime to judge

Or try to think things through,

Is all that here is free!

Where everything is tact

You need a Clean Air Act.

Give me knives, guns, half-bricks,

But give me Lenin’s politics!

(After an evening spent negotiating with Labour Party Marxists gone native.)
Posted by UNITY at 13:28 1 comment:

This is Dystopia, lady!

The Trouble with Hitchens